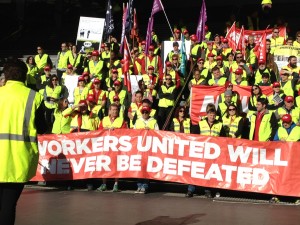 Poverty has many dimensions and causes throughout the world. In industrially advanced countries such as Australia, the establishment of fair and decent labor standards is a key to preventing and eliminating poverty for low income earners.

Fair labor standards mean access to stable and secure employment which provides guaranteed minimum hours of work which in turn deliver sufficient income to support workers and their families.

Workers should expect that award wages will deliver standards of living above the poverty line, but this is not always the case. Coupled with insecure work – casual, temporary and contract employment – low minimum wages mean many workers are trapped in insecurity and poverty.

These are key issues for Australian workers which AIER Executive Director Lisa Heap will address on Friday 18th October at the Fluro Fight Back Anti poverty week event organised by the National Union of Workers.

The AIER is also releasing an expert analysis of the failure of Australian minimum wages to provide low wage workers with incomes above the poverty line prepared by Brian Lawrence, Chairman of the Australian Catholic Council for Employment Relations, for publication in AIER’s forthcoming November edition of our journal The Debate.

AIER is releasing this important article in advance and to coincide with Anti-Poverty Week to draw attention of the need to provide higher minimum wages for Australia’s most disadvantaged employees.