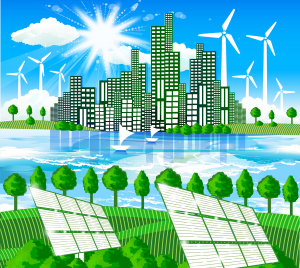 Climate change will profoundly change our workplaces and the way we work. The impacts of mitigating and adapting to climate change are already being felt by workers throughout the economy. Most directly by those working in the energy sector – for good and for bad. Jobs are being created in the renewable energy economy while jobs are being lost in the fossil fuel industry.

The union movement has an important role to play in working with the government and energy companies to ensure a just transition as Australia closes its coal-fired power stations, keeps coal and other fossil fuels in the ground and transitions to a renewable energy economy.

As the ACTU’s report argues a just transition requires that the workers and communities reliant on fossil fuel industries do not unfairly shoulder the burden of Australia’s transition to a clean energy economy. The ACTU proposes a government agency to plan the transition and work with unions and energy companies and local communities to create new economic opportunities, ensure retraining and financial and personal support.

A just transition for the energy sector is vital and urgent. Addressing global warming and living with its impacts will also require changes to how we work in all sorts of industries and jobs. As Caleb Goods argues:

“The implications of climate change for all workers and employers are enormous: the International Labour Organisation (ILO) suggests that 80 per cent of Europe’s CO2 emissions come from industrial production. Thus, the world of work is a critical site of ecological harm and therefore needs to be a site of deep environmentally focused transformation. The interconnection between work and climate change has led Professor Lipsig-Mumme to conclude, ‘[g]lobal warming is likely to be the most important force transforming work and restructuring jobs in the first half of the twenty-first century’.”

Along with the workers in the energy sector, emergency services and health professionals are another group of workers already on the front lines of climate change. Infrastructure planning and building will change in response to global warming. The demand for energy efficiency will create change in manufacturing along with hospitals and schools and universities and warehouses and public service buildings. Cooling our workplaces, managing waste, and the use of other resources are all ways workplaces will need to change. The caring economy has been identified as where the growth of decent work can occur in a post-fossil free economy but it too will need to adapt to climate change.

The ACTU’s Just Transition’s conference coincided with a visit to Australia by Naomi Klein, author of This Changes Everything: Capitalism vs the Climate. The core thesis in Klein’s work is that “climate change – when its full economic and moral implications are understood – is the most powerful weapon progressives have ever had in the fight for equality and social justice.”

The workplace has always been a key site in the fight for equality and social justice and will be again in the challenge of mitigating and adapting to climate change. This is not process that should be left to the owners and managers or to the government. They are not doing a very good job. The people doing the work are usually the best people to figure out how work can be done better, what are the challenges being faced and how best to respond including on how to save energy, reduce carbon emissions and other waste products or reorganise the workplace to adapt to global warming.

There are a couple of examples out of Canada that show how unions and working people can take action to address climate change and create a future of decent and just work.

The union’s approach “explicitly links its’ members’ work with the achievement of key climate change objectives.” It is an example of “how one small union, with the support of its members, has attempted to ‘green’ the culture of the industry in which it operates.”

The second example comes from the Canadian Postal Workers Union who – inspired by the Leap Manifesto – developed a comprehensive plan for how the postal infrastructure in Canada can be utilised in a post-carbon economy. Instead of waiting for the inevitable decline of the public postal system after decades of cuts and undermining, the union and its members developed a plan, “Delivering Community Power: How Canada Post can be the Hub of our Next Economy”. It imagines how “the post office could play a central role in building our next economy — an economy that is more stable, more equal, and less polluting.” The plan shows how the post office could deliver:

Australian workers and unions can do this too. Two key principles of the AIER’s Australian Charter of Employment Rights become important when considering how to enable workers to engage in responding to climate change in their workplaces: workplace democracy and collective bargaining rights. Workplace democracy is the principle that workers have the right to participate in decisions that affect them and their workplaces. Collective bargaining can provide a means by which workers can insert themselves into decisions relating to climate change.

While we can’t turn all our workplace into workers’ cop-operatives, we can start to develop a more robust form of workplace democracy. There is precedent in Australia for collective agreements to include clauses concerning the environment and climate change. For example the NTEU has a number of agreements that provide for the establishment of environmental committees. These are have not always been successful but it is a model that can be built upon.

Under the current workplace relations system the right for workers to be substantially involved in changes in the workplace outside of collective bargaining is very limited. In looking to combat climate change in the workplace, unions and workers can also continue to fight for better collective rights to bargain and take industrial action, including across industries, in relation to issues such as how the workplace can best mitigate and adapt to climate change.

As Naomi Klein said in a speech to the Canadian union Unifor, “Climate change is a tool. Pick it up and use it. Use it to demand the supposedly impossible. It’s not a threat to your jobs, it’s the key to liberation from a logic that is already waging a war on the entire concept of dignified work.”