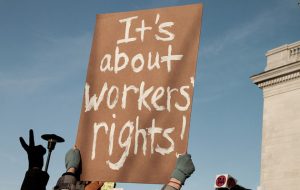 Do progressive organisations have a responsibility to live their values in their workplaces? Can campaigning organisations demand progressive change without demonstrating that we adhere to its basic values – treating people with dignity, people having the right to be involved in decisions that affect them, acting together in our collective interests?

Clare Ozich from Australian Institute of Employment Rights and Jake Wishart from the Media Entertainment Arts Alliance presented a session for the Melbourne Campaigners’ Network on Thursday 17 November. The session:

We started with looking at trends in work and specifically the trend towards greater insecurity and precarity. This is a core challenge of our contemporary world. It is not inevitable but a result of decisions successive governments have made about the structure of our economy and the regulation of work.

These are mechanisms employers are using to avoid entitlements and keep work precarious:

All these mechanisms are present throughout progressive organisations and they are also all legitimate in certain circumstances. Financial resource constraints are a big issue but should never be an excuse. Organisations using these forms of employment to avoid entitlements are exploiting people just like the capitalist businesses we often campaign against.

Technology is not driving these changes. Businesses are utilising technology to advance these trends – to shift the risk of business from capital to labour. Technology is disruptive but it is not disrupting the relationship between capital and labour. We can decide how technology will be used – to promote our values or to undercut them.

Another discernible trend in progressive organisations in particular is the spirit of entrepreneurialism or start-up culture. The start up culture is not all bad – we need new ideas and new ways of being in the world. But when it fails to acknowledge the power differential between employers and workers we start to get into troubling areas. Too often entrepreneurialism is used to cover up avoidance of workers rights in the same way casualisation has been used. Claiming “people want to be freelancers” is just shifting responsibility for how work is structured from the business to the workers. The simple test is to offer people the choice of a permanent position.

There was also discussion about how if organisations do not create decent jobs with wage rates and conditions to meet basic needs, that will limit diversity.

Basic structure of the system of rights

The Fair Work Act is structured around the employment relationship. People need to be an employee to access most entitlements.

The basic structure of wages and conditions for employees is:

A growing issue across the progressive movement and in many campaigning organisations is the structuring of work around independent contractors rather than employing people as employees.

The workshop considered the criteria to determine whether a worker is an employee or contractor.

The impact of being hired as an independent contractor rather than an employee includes having no rights to:

The workshop discussed a few examples of jobs that could potentially be characterised as part time employment contracts, but were offered on the basis of an independent contract.

The Fair Work Act contains sham contracting provisions that allow the Fair Work Commission to determine whether a worker is an employee or genuine contractor. If found to be an employee, the minimum wage rates and other entitlements apply.

As well as the impact on the workers of being denied access to a number of entitlements and protections, there is a significant reputational risk for organisations in structuring work as independent contracts, if the work could be characterised as an employment relationship.

It can be relatively easy to follow the law but that doesn’t guarantee a decent workplace environment, or that workers are not being exploited, or that the progressive movement is not contributing to the trends towards precarity discussed above.

The Charter consists of 10 principles – some of them have already been covered and are straightforward, eg minimum standards, protection from unfair dismissal, safe workplaces. The discussion at the workshop focused on four of the principles: good faith, work with dignity, workplace democracy, and union representation. These principles are directly connected to the values most progressive organisations ask from others in their work.

Management in progressive organisations can fall quickly into a role of employer that is adversarial and defensive. It doesn’t have to be this way and shouldn’t. If anything we should be modelling how to create co-operative workplaces where rights and obligations are met.

Finally, the workshop discussed the role of collective action and heard from people who were involved in negotiating collective agreements in their organisations.

Key points: it takes time, it is hard, but it makes for better working conditions. Seeking advice from people in similar organisations that have done it before is very useful. JOIN YOUR UNION

For most people working in campaigning organisations, the relevant union is the Australian Services Union (ASU). If you work in communications you can join MEAA. If you are not sure which union to join you can find out from the ACTU.

AIER is available for advice and training on establishing good workplace cultures.

The Young Workers Centre is available to give advice to young workers.

Interns Australia is an advocacy group for interns.

The Fair Work Ombudsman is the government agency responsible for enforcing the workplace relations laws.