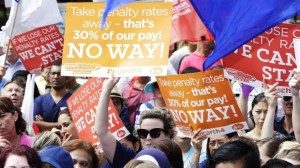 The Fair Work Commission today handed down its decision to reduce Sunday and public holiday penalty rates in the hospitality and retail sectors. The decision will mean hundreds of thousands of workers will take home less pay. At a time of record low wage growth in the private sector there is no question the decision will make life harder for many low waged workers.

The primary conclusion of the Commission is that the existing Sunday penalty rates in the hospitality, retail and fast food sectors did not meet the Modern Award object of providing a “fair and relevant minimum safety net”.

The decision was based on two propositions that the Commission argue emerge from the common evidence:

1. There is a disutility associated with weekend work, above that applicable to work performed from Monday to Friday. Generally speaking, for many workers Sunday work has a higher level of disutility than Saturday work, though the extent of the disutility is much less than in times past.

There are a number of implications that arise from the decision. The most significant being the material impact on people who have been relying on those penalty rates to make ends meet and will now see a reduction in their income. A fact acknowledged by the Commission.

The AIER’s Charter of Employment Rights acknowledges that “patterns of minimum standards need not and should not be frozen in time”, and that industrial tribunals “must have the ongoing ability to establish new national standards in the future, where circumstances warrant, that reflect the needs and capacity of society as it evolves, ensuring that industrial standards facilitate change with equity.” It is in relation to the concept of equity that we believe the Commission’s decision fails.

At the heart of the decision is the conclusion that reducing penalty rates will create more employment and lead to more services being available on Sundays. The Commission notes in its decision that “A reduction in penalty rates will promote flexible modern work practices.” [855] Language that hides a multiple of sins. Here is neoliberalism writ large. The privileging of a particular view of the economy and its centrality in our politics to the detriment of people’s actual lived experience is clear.

It was a disappointing aspect of the Commission’s decision that it accepted the Productivity Commission’s finding that only the low paid workers in the hospitality and retail sectors should face losing wages on Sundays while other higher paid (and more industrially strong) sectors such as emergency services and other industries should not face such a loss. The Productivity Commission’s justification for this division between workers was that there was broad community acceptance of penalty rates for essential services but that the desire for “consumer amenities” – for people to shop and eat and drink and otherwise consume – on Sundays outweighed the need for people providing those services to be paid existing penalty rates.

It is difficult to see this as other than the industrially weak being sacrificed under a misguided notion of fairness interacting with way our economy is now so reliant on low paid workers in the services sector.  People are no longer seen by the Commission as family members or community members. We are consumers integral to the economy or workers needing to sacrifice to the economy, and under the dominant economic paradigm, it is our collective identity as consumers that trumps all others. Of course workers are also consumers, but now many will have even less money to consume with.

Another interesting and disappointing aspect of the decision was the Commission’s treatment of the requirement to take into account equal remuneration. The decision acknowledges the “data on the characteristics of employees in these [industries] showed that they are more likely to be female, younger (under 25 years), work part-time hours, be employed on a casual basis and be award reliant than employees in other industries. Employees in these industries are also more likely to be low paid.” Despite that finding the Commission found that there were no equal remuneration implications of reducing penalty rates because men and women in those particular industries would be equally affected by any reduction. The notion that these female dominated industries would be seeing a reduction in income in comparison to other industries was not commented on. Such a limited understanding of pay equity is deeply concerning.

But the decision and the reaction to it also opens up an important discussion that we should be having about the role of the Commission and the role of Government. No matter how politically expedient it is to blame the Prime Minister for the decision, it was made by the Fair Work Commission under the provisions of the Fair Work Act. Neither the Government nor the Opposition have shown any inclination to reverse any decision made by the Commission to reduce penalty rates. In contrast, the Greens have proposed legislation to protect existing penalty rates.

This prompts the question, what should be the relationship between the Commission and the Government and the Parliament? What rights and protections should be legislated and which left to the Commission? What is the appropriate framework for the Commission in making its decisions?  In the current political circumstances is attempting to legislate more minimum rights an effective strategy or could it lead to a further erosion of rights and conditions? What is the appropriate relationship between rights and conditions being reflected democratically (at least notionally) through parliament  and therefore subject to public opinion and pressure and its various expressions (elections, opinion polls, petitions, rallies) or through quasi-judicial decision-makers weighing up evidence in a tribunal? In these circumstances, how should workers acting collectively in their interests respond?

The nature of our industrial relations system and the role of the Commission has changed dramatically in the last decade. Are we now seeing the predication of Justice Kirby in his dissenting judgement on the Work Choices case coming true? That in shifting the constitutional basis of regulating work from the conciliation and arbitration power to the corporations power, the concept of industrial fairness and reasonableness is being superseded, in the words of Professor Ron McCallum, by laws that are now centred “around corporations to the detriment of flesh and blood persons who interact with corporations “. It is difficult to not see in this decision Professor McCullum’s warning that

“these labour laws will become little more than a sub-set of corporations law because inevitably they will fasten upon the economic needs of corporations and their employees will be viewed as but one aspect of the productive process in our globalized economy.” [527]

The Commission commented in its decision on the limited utility of decisions made under previous legislative provisions. It is now the muddled, confused and at times conflicting objects of the Fair Work Act that define the role of the Commission rather than the constitutional “guarantee of industrial fairness and reasonableness” including for the economically weak and vulnerable that, in Kirby’s words, had such “a profound effect on the wages and conditions of life of Australian workers and their families.”[530]  No longer is the Commission concerned with “shap[ing] the political economy according to the national ethos of the fair go.”[588]

We are now at a point where there is struggle in the face of industrial relations becoming a “subset of corporations law” to hold onto the rights and conditions that were won through conciliation and arbitration and that incorporated the values Kirby argued “profoundly influenced the nature and aspirations of Australian society”. What to do?  We need more than political finger pointing. We need to debate the values and the principles that we believe should underpin the regulation of work. Values such as those found in the Australian Charter of Employment Rights. We need to ditch the neoliberal consensus and shift the basis on which the political debate on industrial relations takes place in Australia. Otherwise, the economic rationalism on display by the Productivity Commission and eagerly adopted by the Commission will continue to put the hard won rights and conditions of workers at risk.