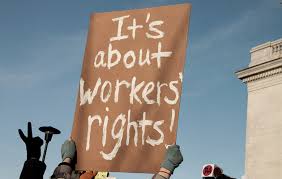 The AIER made a submission to the Senate Education and Employment Legislation Committee Inquiry into the Fair Work (Registered Organisations) Amendment (Ensuring Integrity) Bill 2019.

We argue the proposed amendments are in direct violation of Australia’s labour and human rights obligations under international law, violating the free and democratic administration of trade unions, which is fundamental to the ability of workers to protect their rights at work and further the social and economic interests of the population.

As proposed, we argue the EI Bill represents a targeted regime of substantively and procedurally unfair sanctions that:
• may be initiated by an unreasonably broad range of actors;
• are available on the basis of a wide variety of grounds, conflating serious crime and civil or technical breaches; and
• fail to adequately distinguish between individual and organisational liability.

As such the proposed Bill represents a significant over-reach to the recommendations of the Heydon Royal Commission and risks upsetting the balance between the benefits of registration under federal law and external regulation of an organisation’s internal affairs and activities.

We urge the Committee to recognise the greater cost of denying internationally accepted human rights for democratic civil organisations and their members, and recommend the unequivocal rejection of the EI Bill.