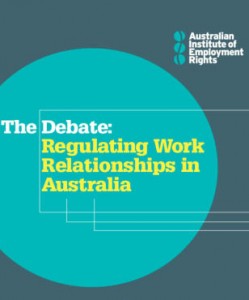 The Australian Institute of Employment Rights (AIER) today launched the first edition of its new magazine The Debate at Parliament House in Canberra.

Over the next few months the federal government will make decisions about the regulation of our work relationships that will shape how workers and employers think, feel and relate to one another.  This is a unique opportunity, a chance to change workplace culture, and bring fairness to Australian workplaces.  It needs to be a fairness based on good faith relationships and the desire to create dignity at work.

Charter Next Steps: The Accreditation System – Lisa Heap, Executive Director AIER
With legislation changing towards more cooperative employment practices, employers are seeking tools that will help them align their practice with the new system’s standards.

The Freedom to Argue – Mark Irving, barrister and Victorian editor of the Australian Labour Law Reporter
Mark Irving explains why employers, workers and their unions should be left to determine the content of their argument.

The Case for an Umpire – Joellen Riley, author and an associate professor in the law faculty of the University of New South Wales
If the United States is considering new legislation that would introduce compulsory arbitration for some interests disputes, why is Australia considering abandoning its industrial umpire?

Industrial Fairness: The Essentials
This report by AIER clearly articulates the gaps in the Rudd Government’s Forward with Fairness policy, offers solutions to these gaps, and argues that now is the time to lay the platform for fairness in Australian workplaces.

A Compelling Argument for Fair Dismissal – Marilyn Pittard, professor in the Faculty of Law, Monash University and founding member of the Australian Labour Law Association
There is a clear legal rationale for returning the unfair dismissal laws to the bulk of Australian workers.

‘Operational Reasons’ Means no Worker’s Job is Safe – Anne Gooley, Maurice Blackburn
It’s not only employees in small businesses who suffer from a lack of unfair dismissal rights.

Super Cop Has No Place in Industrial Relations – Mordy Bromberg SC, senior counsel at the Victorian Bar
Mordy Bromberg asks why the building industry needs a commission with ASIO-like powers to watch over it.

This publication seeks to continue the debate on what constitutes a fair workplace, now, and into the future.  The Institute also hopes that The Debate will act as a guide to those in parliament who have the responsibility to enact fair workplace laws.

The Debate is an initiative of the Australian Institute of Employment Rights, an independent coalition of employers, employees, unions, academics and lawyers who collaborate to promote positive work relationships.

The Debate Magazine is available to AIER members only.  To become a member, click here.